Golden Road Brewing is saving electricity and going green with rooftop and carport solar at their Anaheim Brewery location. California craft brewers are blazing trail for other brewers to think renewable energies when it comes to creating the beers they love. 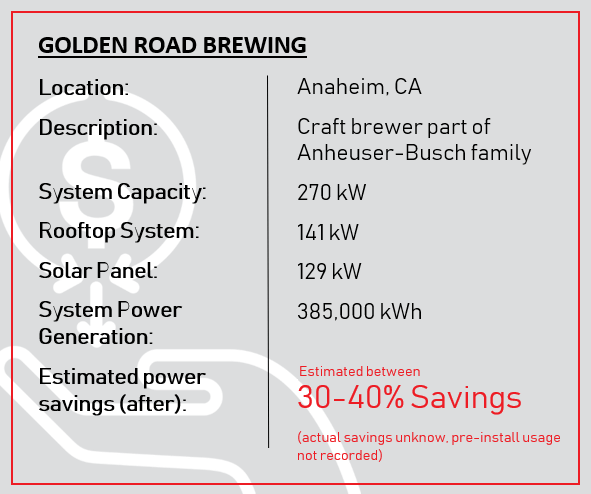 California’s electricity rates average over 6% growth per year. Couple that with increasing usage, Golden Road Brewing was facing a critical decision. They had to regain control of their electricity bill. Installing commercial grade solar was the solution.

Golden Road worked with Revel Energy to install rooftop and carport commercial grade solar at its Anaheim location. “We didn’t know all the financial benefits or how to model it,” explains Brandon Smith of Golden Road Brewing. Revel Energy helped Golden Road through the whole process from customizing a system, to installation and maintenance.

“The project went through several variations,” recalls Martin Brix, VP of EPC at Revel Energy. “In the end Golden Road Brewing was very happy with the results.”

Every business has unique needs when it comes to solar. Revel Energy specializes in custom tailoring renewable energy systems for each customer. In many cases, solar is not the only answer. Energy storage, LED lighting, and/or cogeneration is needed to fulfill the customer’s energy saving goals. Read here how Hokto Kinoko used solar, energy storage and a new roof to save 60% on energy costs.

Golden Road Brewing is part of the Anheuser-Busch family. AB has pledged to be supported by 100% renewable energy by 2025. As of 2019, they look to beat their deadline. Golden Road Brewing will benefit for many years from saving significant energy costs. This is capital they can redirect towards development of new brews maintaining their innovative role in the craft brew industry.

In 2015, Golden Road proudly partnered with Anheuser-Busch. Golden Road is committed to engaging and supporting the growing community of socially-minded beer enthusiasts. Brewed and canned in California, Golden Road’s year-round offerings include Wolf Pup Session IPA, Point the Way IPA, Golden Road Hefeweizen, Get Up Offa That Brown and Wolf Among Weeds IPA.